Rebirth of the Phoenix....I'm Back!

Like a phoenix, I've risen from the ashes.  Literally.  My lungs still feel like I've been a smoker (not that I would exactly know, but I have a good imagination) most of my life.

Exactly 2 weeks since my last run.  I dreamed about running but that is not the same.  I was too sick to even try to run and I am happy that I waited the full 2 weeks.  It could have been a freezing downpour this morning and I would have been jovial.  Luckily it was a perfect running morning.  Temperatures were in the high 40's and I had company to boot. 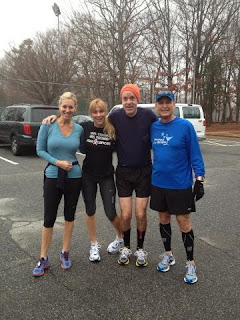 Christie (one of my Sole Sisters), Marty and Bill were there for my running debut, so to speak.  We ran into Charlie Engle in the parking lot and as famous as he is, he agreed to take our photo.  Thanks, Charlie!

I giggled throughout the whole first mile.  It felt so good to be running again.  It felt so good to be among people again.  Running friends have the best conversations.  No judgements, no biases, no worries!  If you never run with other people, you do not know what you are missing.  Don't get me wrong, I cherish solo runs, but only sometimes.  Friends make the miles fly by fast.

We briefly stopped at mile 5 for 20-30 seconds to stretch and that was a big mistake for me.  The coughing commenced.  Starting to run while not being able to take a deep breath was tiring for me, but I kept feeling my friends' eyes bore through me.  I know they were just worried, but it was kind of funny.  I'm the rough 'em, tough 'em girl and they were treating me like a princess.

I finally got in a good groove around mile 8 and was itching to open up the legs a little.  We had been hovering right under a 9 minute per mile pace which was good for 'easing' back into running.  Around the 9 mile mark, Marty took off with me and I exercised my legs.  We finished with a 7:20 last mile.  Yes, it was slower than my marathon pace, but it felt like flying.  Baby steps.  Baby steps.  I keep telling myself it will take time to heal completely.

I joined the local running group at Panera for a bagel afterwards and even picked up a partner for track workouts starting in January.  Pat has no idea what I have planned...I think I should keep it that way.

Do you map out your races a full year ahead of time or do you pick a race a day or two before?  I'm trying to become a better planner.  Speaking of planning, I must get back to the task of Christmas because it is coming whether I'm ready or not....I'm going to treat it like a race :)

In health and wellness,  Cindy
Posted by Health and Wellness on the run at 10:54 AM