I found a new calling.  Who knew I could have this much fun pacing?!  I had one of the most rewarding experiences of my life this past weekend.  It was a weekend of firsts for me.  First, 10 women can absolutely be drama free and all get along swimmingly in a condo.  It was fun because some of the Sole Sisters (Christie, Christine, Sarah, Amy, and myself) teamed up with some of the Woo Hoo Crew (Melanie, Katie, Carole, Kathy) and one from the Streakers (Amanda).  We had an oceanfront condo in Myrtle Beach a few miles away from the start/finish line to the race.

First things first, Christie Strupe (one of the Sole Sisters) bought me the cutest charm for my shoe for the race. 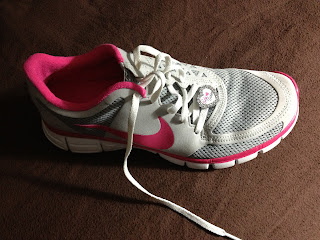 It may be hard to see but it is a sneaker charm from BeeCausecharms.com.  It says Sole Sister. I decided to give my Nike Free shoes a whirl for my pacing debut.  They are super comfortable.  We get to the expo and I am excited to meet some fellow pacers there.  No one was there, but I got my pacer shirt: 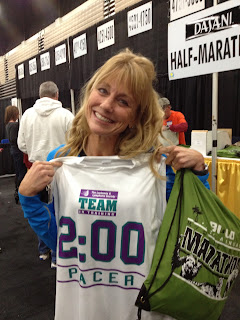 Yes, I look happy.  Yes, I stayed this happy for most of the weekend.  I was so excited for my pacing duties that I barely slept on Friday night.  I have to say it was weird being at the Expo and not having any butterflies in my stomach.  I tend to get a little nervous before a race. We got settled in early for the night, and I taught yoga to everyone in the condo for almost 45 minutes.  Very, very relaxing.

The alarm went off at 4:35am and I shot out of bed and directly into my clothes.  None of my condo mates were able to accompany me to the starting line because I had to be there by 5:45am.  The race started at 6:30am.  I was there practically jumping up and down not only from excitement but from also trying to keep warm.  We got very lucky....it was 42 degrees at the start and warmed up as the race went along.  Rain and then snow didn't start till late afternoon on Saturday.  The beach actually had a dusting of snow when we woke up on Sunday morning.  Back to the race.

I saw several friends I knew and met quite a few people who were in my pace group.  I continually stressed to them that I was NOT going to start out fast and that I had 2 Garmin watches on.  One was set for the 9:05 minute mile and the other one had my overall pace, in the moment pace, and time posted.  I even recounted the Richmond Half Marathon pacing story, so I appeased them greatly.  It also helped to allay their fears when I mentioned I have several sub 1:30 half marathons under my belt.

We didn't hear the elephant (yes, a real elephant was supposed to roar, or whatever  sound  emits from their trunk is) for the start, but we saw all the runners ahead starting to run so we started my one watch for gun time (close to it) and the other watch I started on the starting line for the chip time.  I talked incessantly at the beginning to coax the participants not to go out too fast.  We stayed very steady.  I told lots of stories.  I warned them all......you are either going to love me or hate me.  There would be no in between.  I bopped around and chatted up with everyone during the run.  It was a beautiful morning.  I kept telling them that the key to success is to relax and enjoy the run.

I looked at my watches quite often, but I think the biggest smile I had on my face was when we hit the 6 mile marker and my pacer watch had a bunch of zeros across it.  That was a GOOD thing.  It meant that we were nailing our pace and that we were not ahead or behind our goal.

I really focused on getting them to ignore their mind and let their legs just keep turning over.  I discussed ways to get the core involved to give the legs a break, but mainly I just kept pointing out things along the run to amuse them and make them smile.  I even got bystanders involved during the run.  I would yell, "When I say Myrtle, you say beach, Myrtle...Beach".  Everyone joined in and encouraged my group.  I didn't care if they thought I was nuts or not because I was going to get them to that finish line if I had to pull, drag or carry them.  Luckily, I didn't have to!  Here is a photo from the race almost 3/4 of the way into it: 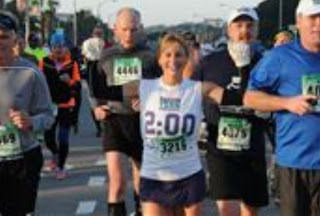 It dawned on me that this great group of people were all going to make it.  I was so thrilled.  I knew that we had quite a difference in gun/chip time so I didn't tell them that we were going to come in under 2 hours.  With a half mile to go, I encouraged anyone who was feeling good to listen for the crowds, empty the mind, and focus on the finish line.  Several took off.  I still had a good number left with me and when we made the final turn towards the finish line, I ran sideways, backwards and encouraged them as loudly as I could.  The crowds were helpful.  I think the louder I yelled for them, the louder the crowds were :)  Here is a photo of me running sideways to coax them to the finish line: 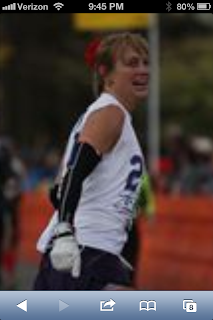 I crossed the finish line at exactly 2:00:01.  However, my chip time ended up being 1:58:18.  I would never have finished this early if my group wasn't all with me.  We lost 2 people that I know of because of being injured and not feeling well.  If we lost any others, I was not aware of them.  Here is me going across the finish line overjoyed for my group: 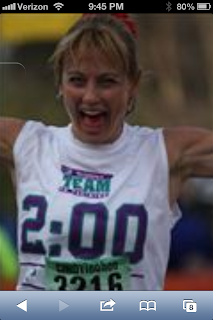 Had I known the red Powerade stained my tongue, I probably would have kept my mouth closed, but I was too happy to even care how I looked.  Yes, my race bib says Cindyloohoo.  Why not.

I got to hang out with lots of friends afterwards and we took several photos.  Most of my friends PR'd on Saturday and I couldn't have been more pleased.  I knew I did the right thing by pacing when several runners and their families came up to me in the post-race area and thanked me.  I also got several hugs from family members for getting their loved ones in under 2 hours.  I turned to several girls in my group and smiled ear to ear.  I felt like I needed to run some more miles and I knew Mark, a friend of the Sole Sisters, was trying to qualify for Boston.  I ran to the 23 mile marker and ran with Mark to help him to the finish line.  He was having some leg issues.  He was battling hard to finish in 3:25.  I could see the pain on his face but I knew he was close to his goal so I ran and tried to keep his mind off of running until his wife Samantha joined us.  I veered off so she could help him the finish line.  He missed it by less than 2 minutes.  He WILL qualify soon.  I just know it!  I got back to our group and we took more photos.
Here is our pyramid attempt: 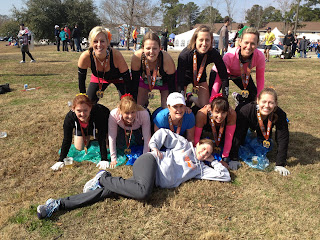 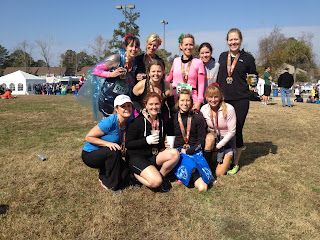 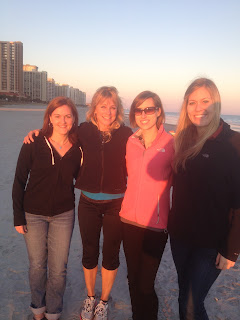 All in all, I     l  o  v  e  d    being a pacer.  I would do it every weekend if I could.  I also enjoyed getting over 19 miles in for the day. After eating, showering and napping, we headed to the after-after party at the House of Blues.  I think I danced for almost an hour.  Talk about fun!  But now my focus will be on the Wrightsville half marathon next month on St. Patrick's Day.  I will be RACING, not pacing.  I better get off this chair and go for a run.......
Posted by Health and Wellness on the run at 1:34 PM