Some years races are easy, other years you wonder if/why you run at all.  This year was my 6th year at the Crooked Road 24 hour ultra.  I love this race.  This is the most well supported race I have ever experienced in 41 years of racing.  For 24 hours, the volunteers kept me hydrated, full and motivated to continue.  Well...almost.  I better start at the beginning.  Being the most de-conditioned I have ever been before an ultra I knew there would be some dicey spots in the race.

Beforehand, I had convinced myself that 80 miles was non-negotiable and 100 miles was my stretch goal.  I was the most relaxed I have ever been before staying awake for 24 hours and moving forward running and walking.  My dear friend, Tonia, let me stay at her house at the Virginia/North Carolina border with my puppy, Miles the night before. She graciously kept him so I could race as Dan was on a golf trip with the boys.  I actually slept like a champ (very unusual the night before a big event) and I got to Rocky Mount, VA around 7:10am.  Perfect amount of time to unpack, visit and get ready for an epic 24 hours.

We had a little fun at the beginning of the race in this picture here: 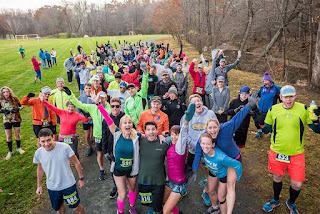 The weather was perfect for this type of event and the warmest this race has ever been to my recollection.  The plan was to run with Dena (who bypassed moving a couple of weeks later so she could be part of the race) till she left which was somewhere near 50 miles and darkness.  I was laser focused for my 80 miles so I was not as sad as I usually am when she deserts leaves me.  I was in good spirits and had fun chatting and running with Stephanie (a first time ultra runner who placed THIRD overall for females) till about 67 miles or so.  She was going to change clothes and get some food so I opted to just keep going because again I was stubborn laser focused for my goal.

Here is a view of part of the course.  I had our Jeep right along the course for all my supplies ( I knew it was going to rain in the middle of the night) and in case I wanted to lie down and nap for a little bit during the night. 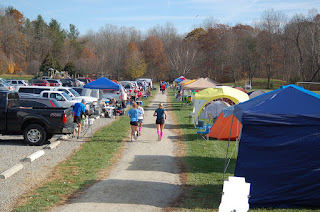 I allow myself to turn on my IPod and phone after 50 miles during an ultra, but I did not turn it on till mile 88.  Why?  I have NO idea.  Although it did start raining in the middle of the night TWICE.  I had a poncho that fell into pieces a few minutes after putting it on and luckily Ricky (the race director) gave me a trash bag that I wore till it stopped raining.  It was as long as I am so I was constantly pulling it up off the ground to prevent myself from tripping.

At some point in the middle of the night I lost the stomach for food.  I could not find anything I wanted so I stuck with chicken broth and it seemed to help me tremendously.  I usually counsel people that if you get behind in your food (which apparently I did) and you stop taking in food you are toast.  Well...I felt like toast, but somehow managed to KEEP GOING.  In retrospect I should have figured out SOMETHING to eat.  During the day I ate peanut butter and jelly sandwiches like they were my job.  I actually stayed away from the really bad sugar, but did allow myself ginger ale and an occasional coke during the night.  These drinks are in 2 oz. doses, so I did not consume much sugar at all.  I did have the McDonalds hamburgers, but I refrained from the pizza this year.  But hey, there is a first time for everything.  Me turning down pizza?

When daybreak came I had less than 5 miles to go to hit my goal.  I became very emotional at around 7am for some reason.  I couldn't point at any particular thing except maybe the lack of food.  I was almost inconsolable the last 2.3 miles.  I was so emotional, in fact, that Dena called Johnny and Melanie and they ran around the course trying to find me and helped me emotionally get over myself and get an extra lap to win this race for females.

Here is the official list of finishers and their total mileage.  There were 10 people over 100 miles with 2 of the finishers being females. 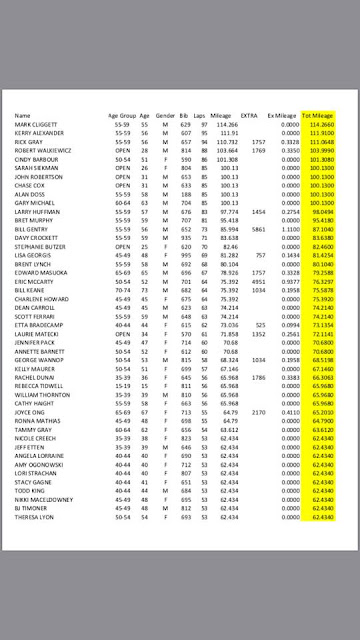 Here is Mark and myself accepting our overall Male and Female award complete with the cutest little Banjo I have ever seen.  I am currently coveting it on my kitchen counter.  I have never been so tired, yet so happy. 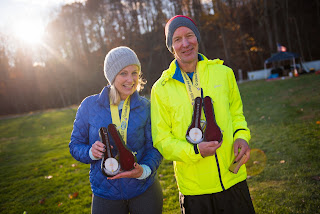 Here are the Greensboro friends that were there at the end to cheer, hug, cry and celebrate with after the race.  Johnny, Amy, Stephanie, and Melanie. 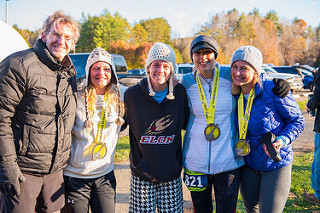 I do not know what is next for me, but I look forward to the next adventure!

Posted by Health and Wellness on the run at 11:15 AM