I was afraid to tell anyone my goal.  I didn't want to disappoint anyone, most of all myself.  I envisioned me accomplishing my goal but I had reservation because I wasn't sure if I would be recovered enough from racing in a half marathon the weekend before.  I finished in 1:30:42 and won my 45-49 age group at the Richmond American Family Fitness Half.  It wasn't a PR, but I felt like I ran pretty hard. After the half I had a full week with classes and clients and continually thought about my goal:  75 miles.  Seemed incredibly lofty since I quit after 56 laps last year.  Only a few friends knew the details because I was experiencing some fear of failure issues.  The more the week progressed the more I decided I was being silly and needed to articulate my race intentions.  I announced it to my noon class at the Yafter a vigorous BodyPump class on Thursday.  There...I said it, even explained how I was going to accomplish it.  I was going to walk more than I did the previous year.  My nervousness began to kick in.  I hate to disappoint people, especially myself.  To make matters worse, I intentionally started this blogsite the night before the event so I would have my intentions immortalized on the internet.  After writing the first entry I tried to go to sleep.  Sleep eluded me until almost midnight.  I woke up before my alarm at 6 and nervously gathered my belongings and got into my car.

I arrived and unloaded all my bags I thought I would need for the 24 hours.  Dena, my friend, and I brought way too much stuff last year when we participated in this race.  I am sheepishly admitting I brought just as much stuff, if not more.  This year I brought in addition to 2 big bags of clothes 2 yoga mats, sleeping bag, pillow etc.  I also brought tons of food that I did not eat because the organizers had a bountiful table filled with  pretzels, M&M's, grapes, raisins, bananas, cookies, burgers, soup, etc.  I was able to make it to the starting line with 10 seconds to spare and we all took off.

It was great running into several runners that I competed with last year.  Runners in ultra events are extremely friendly. There is nothing like a small loop and 24 hours to really get to know some of the people around you.  I was known as the smiling lady because even in the cold of night, I was thrilled to be where I was.

I'm sure I will blog about specific memories from this race, but for now...here are some photos taken by the race director, Ricky Scott.  Who, may I add, was very inspirational to me and helpful when I started doubting myself.  Here are some photos 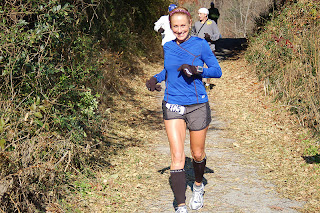 This is the one and only hill on the course.  This is early in the race....although I smile throughout the rest of the photos, I can assure you I truly  f e l t  the smile in this photo.  I felt great.  I felt great until about mile 31.  More on that later.
The temperatures were in the 30's to begin with and warmed up to 50 something and then got very, very cold at night. 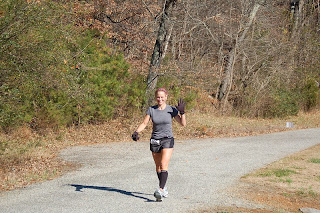 It warmed up nicely in the afternoon, so I was able to take off layers.  Yes, I'm still smiling.  Let me leave you with 2 more photos.  First one is taken around 1am and I was freezing, shivering and trying to keep warm by the fire with help from Johnny and Gloria who bundled me up and brought me soup.  They thought I was done. 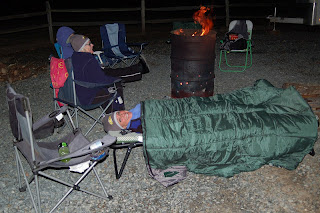 I'm smiling, but this was because I was finally getting warm.  I had 4 layers of clothes on, 2 scarves, hat, and gloves with hot hands in them and I was still cold!  Here is the end of today's story: 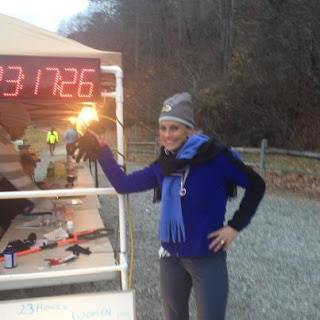 In health and wellness,
Cindy
Posted by Health and Wellness on the run at 7:08 PM